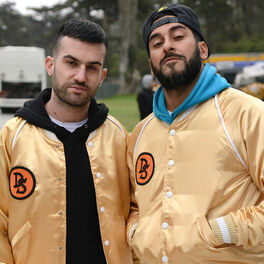 Smiley Face / Get to Steppin

by Ted the Dillenger

by Rich The Factor

Stay at home with Pitbull

The DJ duo Duck Sauce is a US-Canadian collaboration between DJs Armand van Helden and Alain Macklovitch. The duo's first two releases were 'aNYway' and 'You're Nasty' released in 2009. The track 'aNYway' made it to number 22 in the UK charts and was a minor club hit in Europe. It wasn't until the following year with the release of 'Barbara Streisand' that Duck Sauce hit the big time with the track being certified platinum in Australia, Canada and Germany and reaching number one in various European chart listings. The song features extensive samples lifted from the track 'Gotta Go Home' a 1979 hit for the German disco group Boney M. It was nominated for a Grammy Award and picked up an International Dance Music Award for the duo.

Subsequent Duck Sauce tracks have failed to equal the success enjoyed by 'Barbara Streisand' and van Helden and Macklovitch have not released any further tracks since their 2014 single 'NRG' which used samples fom Melissa Manchester's 1985 hit 'Energy. 'NRG' peaked at 73 in the Belgium charts and failed to make the charts in any other countries.