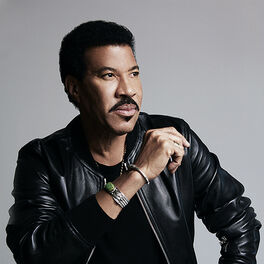 Dancing On The Ceiling

All Around The World

Lionel Richie won a college tennis scholarship, but was diverted instead by his love of music, joining a succession of R&B bands in Tuscegee, Alabama. He finally achieved success as singer and sax player with The Commodores who, after one album for Atlantic, signed to Motown, where they were groomed in the mode of the Jackson 5. But, quickly emerging as a classy romantic songwriter, Richie led them in a softer, more melodic direction, which climaxed with the massive international hit Three Times A Lady. He was suddenly in demand as a songwriter and collaborator, writing Kenny Rogers' No 1 hit Lady and duetting with Diana Ross on the hit theme song for the movie Endless Love. Continuing his relaxed, sentimental approach, Richie achieved his first solo hit with another ballad Truly in 1982, surpassing it with even bigger hits All Night Long, Hello and Say You, Say Me. His adopted daughter Nicole Richie is a TV personality.