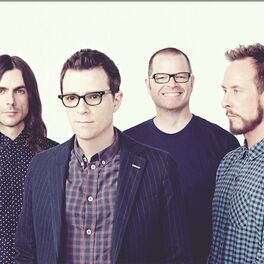 Everything Will Be Alright In The End

Nerd-rockers Weezer, originally made up of Rivers Cuomo, Matt Sharp and Patrick Wilson, added Brian Bell before signing to Geffen Records and releasing their debut album 'Blue Album' in 1994. Featuring UK and US hit singles 'Undone - The Sweater Song' and 'Buddy Holly', it set the band off in the right direction bringing their uniquely American geek rock to an ever-growing fan base. After the release of their second album 'Pinkerton' in 1996, Sharp left to pursue solo efforts, with the group bringing Mikey Welsh aboard on third album 'The Green Album' in 2001.

Their popularity didn't seem in any way to be abating after a year-long tour and subsequent release of 'Maladroit' in 2002 and featuring Muppets on the video to single 'Keep Fishing'. Things were kept cheerful and rocky when the band returned in 2005 with the Rick Rubin-produced album 'Make Believe' that hit number two in the US Album Chart, featuring the stomping 'Beverly Hills' and 'This Is Such a Pity'. In 2008, the group released 'The Red Album', featuring 'Pork and Beans', and a year later came back with 2009's acclaimed 'Raditude' and 'Hurley' in 2010. Their ninth album, 'Everything Will Be Alright in the End', was released in 2014 with follow-up 'White Album' in 2016. After a tour with Panic! at the Disco in 2016, they announced 'Pacific Daydream' for 2017 followed by 'Teal Album' in January 2019 and 'Black Album' in March 2019.