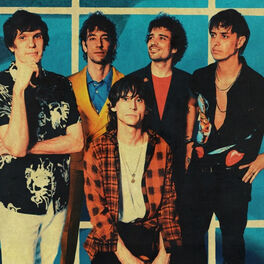 Taken For A Fool

Under Cover of Darkness

You Only Live Once/Mercy Mercy Me

Looking for Alaska (Music from the Original Series)

Along with The White Stripes, The Strokes were in the right place at the right time as saviours of the rock genre when rap-rock groups were threatening to dominate the rock scene back in 2001. Brought together by a mutual love of the sounds of Lou Reed and Tom Petty, messrs Casablancas, Valensi, Fraiture and Moretti, all pupils at Dwight, came together to pen songs and play music. The group added guitarist Albert Hammond Jr and started playing gigs at venues across New York City, building their reputation among the city's music cognoscenti. However, after being sent a tape of their music, it was Rough Trade in the UK who signed the band and released their first record, EP Modern Age. The Strokes' first single Hard To Explain was released in June 2001 and reached Number 16 in the UK single chart, and their debut album Is This It arrived in September of the same year. The album managed to reach Number 2 in the UK album chart, despite Woolworths and HMV refusing to use its risqué cover. Last Nite was released as a single at the end of 2001. The group knocked out their second album Room On Fire in 2003, to acclaim, with tracks such as Reptilia and Meet Me In The Bathroom before a third album First Impressions Of Earth hit the top of the UK album chart in 2006.