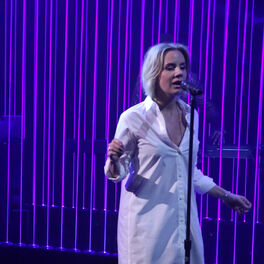 Matters Of The Mind

Lay It On Me (TDK Remix)

We Are Gonna Live

Lay It on Me

Lie To Me (feat. Ina Wroldsen)

A talented songwriter who has helped pen hits for Calvin Harris, Clean Bandit and Jess Glynne, Ina Wroldsen took her own shot at pop stardom in 2018 and released a collection of shimmering, heart-twanging electro anthems on debut EP 'Hex'.

Growing up in the small coastal town of Sandefjord in Norway, the music world seemed completely unattainable to Wroldsen until she was 14-years-old and heard fellow Norwegian pop star Lene Marlin singing her hit 'Unforgettable Sinner' in 1998. It inspired her to become a singer and, by 2004 she was styling herself as an indie pop starlet similar to Avril Lavigne or Gwen Stefani and went to America to work with different producers. When success failed to materialise, she enrolled in a history course and, at the age of 22, was ready to quit the music industry when a publisher encouraged her to turn her hand to writing songs for others. She cut her teeth as part of the songwriting team who created several tracks for the first two albums by UK girl group The Saturdays and she credits 'Impossible', co-written for Shontelle which became a top ten single in the UK, as the track that helped her grow into a more honest and skilled writer. It led to her working on a number of big hits including 'I Found You' by The Wanted, 'Twilight' by Cover Drive and 'Lullaby' by Professor Green, while 'X-Factor' winner James Arthur later took 'Impossible' to number one in the UK charts in 2012.

She also formed electro-folk duo Ask Emba with Arnthor Birgisson in 2013 and her vocals featured on the big summer club anthem 'How Deep Is Your Love' by Calvin Harris & Disciples in 2015. She went on to co-write the chart-topping hits 'Hold My Hand' by Jess Glynne and 'Rockabye' and 'Symphony' by Clean Bandit. She wrote other songs for Shakira, Steps, Anne-Marie and Olly Murs and, buoyed by their success, cautiously embarked on a solo career with one-off singles 'Aliens' and 'Lay It Over Me' in Norway. She also sang on dance hits 'Places' by Martin Solveig and the Brit Award-nominated 'Breathe' by Jax Jones.

She went on to perform her first live tour in 2017, before landing a deal with Simon Cowell's Syco Music record label and re-launched herself as a dreamy electro-pop balladeer with single 'Strongest' and EP 'Hex'. Hailed for leading a new generation of Nordik Beat artists, Wroldsen confronted personal anxieties and wandered off into stories laced with Scandinavian folklore on 'Hex' which won two Spellmannprisen Awards and featured on Steve Aoki's track 'Lie to Me', before collaborating with Brazilian DJ Alok on the pop single 'Favela' in 2018.