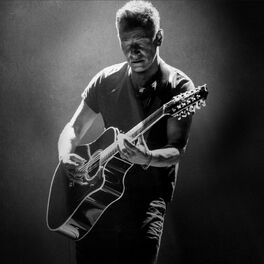 Western Stars - Songs From The Film

The Live Series: Songs from Around the World

The Live Series: Songs Under Cover

The Live Series: Songs of Love

The Live Series: Songs of Hope

The Live Series: Songs of Friendship

The Live Series: Songs of the Road

by Blinded by the Light

Born and raised in New Jersey, Bruce Springsteen was hooked on rock & roll from an early age and in his teens played in bands The Castiles, Earth, Steel Mill and Dr Zoom & The Sonic Boom. Legendary A&R man John Hammond signed him to Columbia and in 1973 he released his debut album 'Greetings from Asbury Park, NJ'. It initially struggled for sales but, backed by The E Street Band, his thrilling live act won a fervent following and his 1975 album 'Born to Run' turned him into an international superstar.

Springsteen's explosive, working-class anthems have seen The Boss, as he came to be known, become one of the world's best-loved and most influential artists, even appearing at the inauguration of President Obama in 2009. Throughout his career he has released 19 studio albums, including his latest solo effort 'Western Stars' (2019), 16 live albums and more than 70 singles. His most successful albums 'Born to Run' and 'Born in the USA' (1984) produced some of his most famous and best-selling singles including 'Thunder Road', 'Jungleland', 'Dancing in the Dark' and 'Glory Days'. He was inducted into the Songwriters and the Rock & Roll Halls of Fame in 1999 and was awarded the Presidential Medal of Freedom in 2016.

An eight-week stint of 'Springsteen On Broadway' ran at the Walter Kerr Theatre in New York in 2017, winning a Tony Award for his production. Quashing rumours that the show's success meant the end of The E Street Band, Springsteen announced upcoming new music and a tour with the band for 2019. He also revealed plans to release his film 'Western Stars' after its premiere at the Toronto Film Festival.