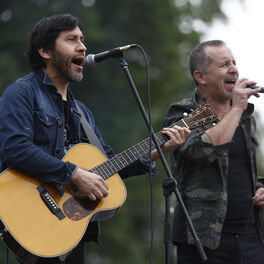 We Are Sudamerican Rockers

Los Prisioneros were a rock band from Chile who were leaders in the new Chilean pop movement (Nuevo Pop Chileno) in the 1980s. Formed in 1979 in Santiago by school friends singer-songwriter and bassist Jorge González, guitarist Claudio Narea and drummer Miguel Tapia, they were joined by guitarist Alvaro Beltran and debuted as Los Prisioneros in 1983. Other musicians played with the band as they became a major influence in Chilean pop music until they disbanded in 1991. They reformed in 2001 and stayed together until 2006.