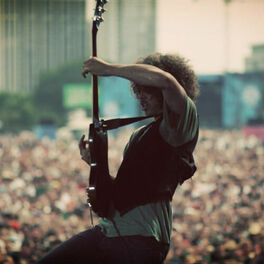 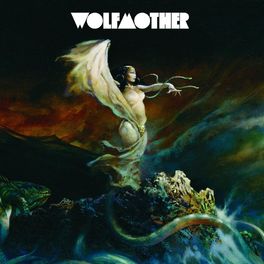 Pledging allegiance to thick, throttling fuzz guitars, primal psychedelia, and thundering rhythms, the 21st century rock revivalists Wolfmother split the difference between the classic sludge of and the retro-garage rock of the . Led by guitarist/vocalist , the power trio came storming out of Sydney, Australia in 2006 with a self-titled debut that generated international hits in the form of "Woman" and "Joker & the Thief." Although they had some stumbles following up this initial success -- bandmembers came and went, leaving the sole original member -- their subsequent albums Cosmic Egg (2009) and New Crown (2014) played to a cult devoted to their heavy, riff-oriented rock. formed Wolfmother in 2000 with drummer Myles Heskett, who then brought in bassist/keyboardist Chris Ross. A few years of woodshedding followed but things started to move quickly after their first concert in April 2004. Four months later, the trio inked a deal with , knocking out a self-titled EP at Detroit's Ghetto Studios with producer Jim Diamond (not coincidentally, Diamond helmed early records). The EP wound up charting on the Australian singles chart and the group kept touring before signing to and heading to Los Angeles to cut a full-length debut with producer David Sardy. Wolfmother, the album, came out in Australia that October, where it turned into a big hit; it would eventually be certified quintuple platinum in their homeland. Other territories followed in early 2006 and the album performed well in each of them thanks to the singles "White Unicorn," "Woman," and "Joker & the Thief," along with a host of film, television, and video game placements, not to mention constant touring with a focus on festivals. Following this heavy promotion for Wolfmother, fractures started appearing in the band. In August 2008, announced the departure of Heskett and Ross. expanded Wolfmother to a quartet, adding guitarist Aidan Nemeth, bassist/keyboardist Ian Peres, and drummer Dave Atkins, debuting this lineup early in 2009 under the pseudonym White Feather. Around this time, this incarnation began recording a second Wolfmother album. Entitled Cosmic Egg, it appeared in the fall of 2009, debuting high in many countries -- it reached three in Australia and 16 in the U.S. -- but it failed to generate the same excitement as the debut. Wolfmother continued to tour the album into 2011, with Will Rockwell-Scott replacing drummer Atkins in 2010. Then, they turned their attention to recording a third album but things in the band continued to be unstable. Nemeth and Rockwell-Scott both departed in 2012, replaced by guitarist Vin Steele and drummer Hamish Rosser, and a new keyboardist called Elliott Hammond also joined as the group continued to record a third album. As it turned out, decided to retire the name Wolfmother and release the record as a solo album called Keep Moving in the summer of 2013. Keep Moving didn't do much on the charts -- it peaked at 32 in Australia -- and by the end of the year, announced that Wolfmother was once again an active concern (albeit without Hammond, who turned out to be a short-timer). Steele moved over to drums and Wolfmother were once again a trio; this is the version that released a surprise album called New Crown in the spring of 2014. A year later their debut was re-released as as deluxe, two disc edition in celebration of Wolfmother's tenth anniversary. A new track "Victorious," was issued as a pre-release single in November, and followed by a second "Gypsy Caravan," in January, 2016. n Febnruary, the album Victorious was released. Recorded in Hollywood, it was produced by . the lineup listed on guitars, basses, and vocals, Peres on keyboards, and drummers and Joey Waronker. ~ Stephen Thomas Erlewine, Rovi