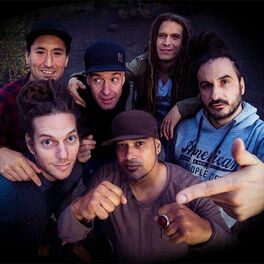 Whether at the Olympia and the Zenith in paris, the Francofolies in Montreal, the Summerjam in Köln, the Jaria Reggae Month in Kingston or at the Dour festival, Broussaï have taken every stage across Europe and beyond by storm. Based on the incredible relationship they have established with their fans, journalists describe Broussai as a real live band. Recognized as one of the flagship bands of French Reggae, Broussaï have appealed to crowds through subtile lyrics and dynamic music. Their latest two albums called 'Perspectives' and 'Kingston Town' won the "Victoires du Reggae" award for 'best French album' in 2010 and 2013. In 2012, Broussai became the first French group to be invited on Jamaican television when they appeared live on TVJ’s morning program “Smile Jamaica”. With over 600 gigs on the clock, Broussaï Live is a unique experience that's bound to move you. Broussaï will be back with a peppy album in 2015, more urban and definitely more contemporary. Artwise the band likes moving forward and have always extoled evolution in music or messages. So, after a trip to Jamaica and the roots of reggae and after recording the vintage album 'Kingston Town' at the legendary Harry J studio (Bob Marley, Burning Spear, Jimmy Cliff), Broussaï is turning to modernity and current sounds. Actually most tracks on 'In the street' were composed and recorded like a hip hop album, mixing samples and loops played by Broussaï themselves. Both singers still write protest songs but with a sensitive positive touch and emotion-arousing melodies. That results in an energetic CD where each track is tinged with a particular mood that's emphasised by surrounding electro sounds. 'in the street' celebrates the diversity of Reggae and Jamaican culture by sometimes touching upon dubstep and hip hop. What with this mature sincere album, which should push the band high up in the firmament of Reggae, Broussaï haven't finished impressing you.