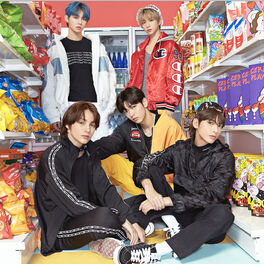 Six years after K-pop icons BTS started out on their journey to global superstardom, the Big Hit Entertainment company that masterminded their success launched their second boyband TXT ('Tomorrow X Together') in 2019, and set out to dominate the pop world all over again. Unveiling the members over ten days with a series of introduction videos, the line-up was confirmed as Yeonjun (main dancer), Soobin (leader), Huening Kai (rapper), Taehyun (vocalist) and Beomgyu (vocalist, centre man).

Early single 'Crown' was an electro-pop ballad that shifted from strutting raps to pouty, doe-eyed crooning whilst 'Cat and Dog' was a quirky, mid-tempo piece of android-R&B that sounded like a K-pop mix of Lady Gaga, Backstreet Boys and TLC, and the boys were quickly building up a huge army of adoring teenage fans. 'Blue Orangeade' was another popular track and their five-track EP 'The Dream Chapter: Star' went on to top the South Korean charts, before they completed their first tour of the US with sold-out shows in Chicago, New York, Los Angeles, Atlanta, Dallas and Orlando.