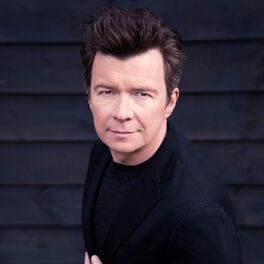 The Best of Me

Keep It Turned On

Hold Me in Your Arms

Whenever You Need Somebody

Unwanted (Official Song from the Podcast)

Every One of Us

by Rick Astley, The Unsung Heroes

Never Gonna Give You Up (Pianoforte)

by Will O' The Wisp, Rick Astley

It’s one of contemporary music’s most unlikely tales. At the age of 21, Rick Astley emerged from the shadows of the Stock, Aitken and Waterman production house as their former tea boy became one of the biggest stars on the planet. His era-defining classic ‘Never Gonna Give You Up’ topped charts the world over and catapulted the young Lancastrian on a journey that would encompass 8 consecutive UK Top 10 hits and 40 million sales. But six years later it was over, as Rick retreated from the public eye to focus on being a parent. His relentless schedule and reluctance to be cast as a teen icon had also taken its toll. “I’d had enough,” he summarises. “I never fell out of love with music, just the music business.” In 2016, Rick celebrated his half-century by releasing ‘50’ - an album title that put a cheeky, middle-aged twist on Adele’s ‘19’, ‘21’ and ‘25’. “I thought rather than buying a Harley-Davidson I'd make a record,” he notes with characteristic dry wit. Having written and produced the album as well as playing all of the instruments himself, suddenly it was like he’d never been away. It raced to the top of the charts and began a seven-week run in the Top 10. In the months that followed, he sold 400,000 albums and 100,000 tickets to his headline shows. “When I made the record, I didn’t know if anyone was going to hear it,” he admits. “So to play on these big stages in front of a sea of people singing the words back at you, it’s beyond belief.” He cemented that comeback with 2018’s ‘Beautiful Life’. It was an emotionally-charged collection with songs that celebrated his love for his wife, his daughter and music as a whole. His commitment was rewarded with a #6 chart position - his fifth Top 10 album. And the shows continued to scale up too. “It has been a beautiful life,” says Rick. “Maybe it didn't start out that way. There’s been tough times. But I’ve got so much to be thankful for. How many people get a chance to live out their dreams, not just once, but twice?” Now Rick celebrates his extraordinary story with the release of the new career-spanning compilation ‘The Best of Me’. It charts that initial run of hits alongside recent fan favourites such as ‘Keep Singing’, ‘Angels On My Side’ and ‘Beautiful Life’. It also digs into some deep cuts too, such as ‘Lights Out’ from 2010. The set is bookended with a step into the past and an eye to the future. Again entirely self-written, produced and performed, opening track ‘Every One of Us’ is a brand new song that shows that the power of Rick Astley 2.0 is undiminished. And it closes with a new ‘Pianoforte’ take on ‘Never Gonna Give You Up’. Dropping the peppy ‘80s beats for an intimate piano arrangement captures it in a new light, its inner heartbreak becoming all the more apparent. “It’s been an amazing experience to rework ‘Never Gonna Give You Up’,” says Rick. “That song is part of my DNA and it means a lot to me. I hope people like what I’ve done with it as much as I do. And ‘Every One of Us’ is about the fire in all of us. We all have something to give, even if it doesn’t always feel like we do. I’m so lucky to feel that fire every time I’m on stage, and that helps me feel it in my everyday life too.” Continuing that spirit of reinvention, Rick independently recorded a set of ‘Reimagined’ interpretations of his songs, old and new, for the second disc of ‘The Best of Me’. While Rick’s musical style has evolved over the years, the ‘Reimagined’ recordings show that quality songwriting has always been an essential hallmark of his work. 2019 has seen Rick back on the road, playing to 500,000 people over the course of 38 stadium shows with Take That, hitting the Isle of Wight Festival, Pub in the Park and Chris Evans’ Carfest, headlining Kew The Music. You’ll hear the favourites, of course, but Rick’s love of music means that his sets are often peppered with some inspired covers - as vintage as AC/DC’s ‘Highway To Hell’ and as contemporary as Calvin Harris and Rag ‘n’ Bone Man’s ‘Giant’. Next up: Australia, Japan and his first ever show in New Zealand. Aside from the lure of that immediately distinguishable voice, the rest of Rick’s story has been consistently unpredictable. As for the years to come? It’s a matter of continuing to enjoy the ride, wherever it may take him.