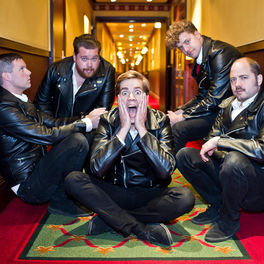 The Black and White album

by The Hives, Cyndi Lauper

Sharply dressed in a strict black and white dress code, The Hives' primal storm of Stooges-inspired garage punk chimed with a growing scene of raw, low-fi rock'n'roll bands that emerged in the early 2000s. Rising from the small mining town of Fagersta, Sweden, the band formed in their teens under the guidance of mysterious svengali and chief songwriter Randy Fitzsimmons, building a burgeoning live reputation and releasing the albums Barely Legal (1997) and Veni Vidi Vicious (1999). Signed by Alan McGee's Poptones label in 2001, the band started making waves in the UK alongside the likes of The White Stripes, The Strokes and The Vines; and a compilation of tracks from their early albums and EPs was released as Your New Favourite Band (2001), which reached Number 7 in the UK charts. Full of strutting, good natured humour and full-throttle energy, they had hits with Hate To Say I Told You So and Main Offender and performed at the 2002 MTV Video Music Awards before releasing Swedish Number 1 album Tyrannosaurus Hives (2004). Working with a number of producers including Neptunes, Timbaland and Jacknife Lee, The Black and White Album (2007) spawned the storming lead track Tick Tick Boom and the lads duetted with Cyndi Lauper on download-only single A Christmas Duel.