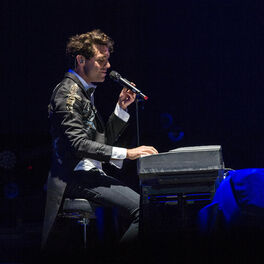 My Name Is Michael Holbrook

My Name Is Michael Holbrook

No Place In Heaven (Special Edition)

No Place In Heaven

The Origin Of Love

The Origin Of Love (Deluxe)

The Boy Who Knew Too Much

Sound Of An Orchestra

Michael Holbrook Penniman Jr., aka Mike, was born in Beirut, lived in Paris, speaks several languages, was head of a Kensington school choir, studied at London's Royal Academy of Music, was trained by famous Russian opera singer Alla Ardakov and has an extraordinary vocal range more commonly found in opera. He initially gathered attention online with the release of his first single 'Relax, Take It Easy' in 2006. Winning a BBC poll of stars of the future, he fulfilled expectations with the single 'Grace Kelly', which topped the UK chart in January, 2007. His debut studio album 'Life in Cartoon Motion' (2007) cemented his promise, winning the Brit Award for British Breakthrough Act in 2008. Success continued with the follow-up EP 'Songs for Sorrow' and his second album 'The Boy Who Knew Too Much' (2009), which included the hit 'We Are Golden'.

Following the release of 'The Origin of Love' (2012) and 'No Place in Heaven' (2015) and appearing as a judge on 'The X Factor Italy', Mika returned with his fifth studio album, 'My Name Is Michael Holbrook', in October 2019.