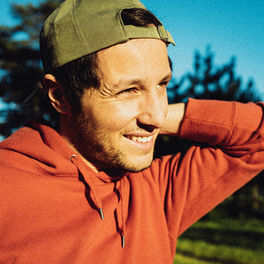 Vianney is probably the most popular singer in France. How did it all happen? Multiple platinum albums, Victoires de la Musique (French Grammy), sell out tour, writing songs for superstars such as Celine Dion. It all boils down to his exceptional songwriting skills and irresistible stage presence. He is a natural born entertainer who has been compared to Yves Montand and Ed Sheeran. Vianney and his guitar form a duet, as he is alone on stage. His energy and charisma fill up the whole space, an intimate room or a stadium, and his unique engagement with the crowd is key to the performance. His influences stem from realist singers of the 60's to French folk of the 70’s, up to American legends such as Joni Mitchell. When he was in middle school in a très chic neighbourhood of Paris, he dreamed of going to military school where all the prejudice are forgotten and everyone is equal. He ended up graduating from a business school in London and then enrolled in a fashion institute ( he will be launching his own line of clothes next year) before focussing all his creative energy into music. Affable, open and warm, Vianney finds his inspiration from the charity works he does or the weeks long walking trips he particularly affectionate.