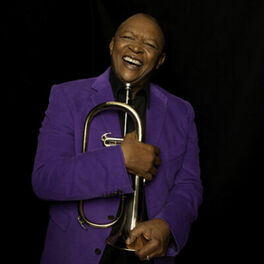 Shabaka and the Ancestors

The passing of Hugh Masekela in 2018 left a void in South African music which will take a long time to fill. The popular trumpet player was born in the Kwaguqa township, a tough industrial region of Witbank, South Africa. Masekela's distinctive jazz style had its roots in mbaqanga, a type of music which came from Zulu culture. Masekela was born into an educated family and during his career campaigned on a number of social issues. His songs often had themes of apartheid, slavery and government oppression and he wrote two of the best known anthems of the apartheid movement 'Soweto Blues' and 'Bring Him Back Home'.

His writing and performing was by no means limited to protest songs and in 1968 he enjoyed a surprise US number one hit with the instrumental 'Grazing in the Grass' written by Philemon Hou which went on to sell over four million copies. Masekela's carer began in the late 1950s when he joined forces with the legendary Dollar Brand to form the Jazz Epistles along with Johny Gertze, Makhaya Ntshoko and Kippie Moeketsi. He went on to have a successful pop career in the US where his reputation as a trumpet player became established and in the 1980s he played with Paul Simon on the 'Graceland' tour and during his professional life Masekela was nominated for a Grammy Award on three occasions before finally succumbing to prostate cancer in 2018 at the age of 78.