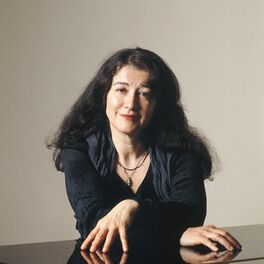 Beethoven: Symphony No.1 in C; Piano Concerto No.1 in C

Martha Argerich and Friends Live from the Lugano Festival 2016

Martha Argerich and Friends Live from the Lugano Festival 2015

Martha Argerich and Friends Live from the Lugano Festival 2014 (SD)

Martha Argerich was a child prodigy who played her first concert of music by Mozart and Beethoven at the age of eight and won the International Chopin Piano Competition in Warsaw in 1965 when she was 24. For the next 50 years she was hailed as one of the greatest classical music pianists, known especially for her recordings of Messiaen, Prokofiev, and Rachmaninov. She has performed with orchestras at major venues around the world including the Royal Albert Hall for the BBC Proms.

Born in Brazil, she studied in Europe when her parents were appointed to diplomatic posts in Austria. After winning the top piano prizes, she achieved fame with her performances of 19th and 20th century piano works but also played and recorded the piano concertos of Beethoven, Bartók, Debussy, Liszt, Ravel and Schumann. Chamber music has been important, too, and she performs frequently with violinists including her daughter Annie Dutoit.

Argerich's albums have placed often on the Billboard Classical Albums Chart including 'The Collection 2: The Concerto Recordings' (2009), 'Concertos' (2011), 'Mozart: Piano Concertos K503 & K466' with Claudio Abbado and the Orchestra Mozart (2014), 'Argerich Plays Chopin' (2010) and 'Rachmaninov/Tchaikovsky: Piano Concertos' (1995). She has won numerous awards and is the subject of two films, Georges Gachot's 'Martha Argerich, Evening Talks' (2002) and 'Bloody Daughter' (2014) by her daughter Stéphanie Argerich Blagojevic. Argerich has had successful treatment of the cancer that was diagnosed as malignant melanoma in 1990, and she continues to perform and teach.