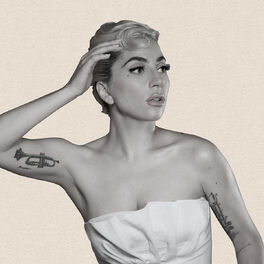 BORN THIS WAY THE TENTH ANNIVERSARY

A Star Is Born Soundtrack

Together For The Holidays: Christmas At The Cottage

Lady Gaga is anything but a traditional female pop star. An Italian-American from Yonkers, New York, she was educated in a private Roman Catholic school, learned piano at four and wrote her first song at 11. She studied music at New York University and started performing in clubs and burlesque shows while still a teenager. Dubbed Lady Gaga after the Queen hit Radio Ga Ga by music producer Rob Fusari, and struck by a vocal style and love of glam rock reminiscent of Freddie Mercury, she formed "the ultimate pop burlesque rock show" with performance artist Lady Starlight. Lady Gaga went on to write songs for the likes of Fergie, Pussycat Dolls, Akon, New Kids on the Block and Britney Spears and released her first two singles in 2008, Pokerface and Just Dance. These achieved huge success across the world, especially within the clubbing scene, with Pokerface reaching Number 1 in over twenty countries worldwide. To promote her debut album, The Fame, she opened for the Pussycat Dolls on their World Domination Tour, and then proceeded to tour as part of her own personal publicity campaign. Her eccentric, vaudevillian fashion tastes and musical ability have led many to label her as the female Freddie Mercury, and glam rock heavily influences her inanely catchy dance songs. The release in 2009 of her slightly darker second album, The Fame Monster, was received well by critics, as did the publicity tour Lady Gaga embarked upon to publicise it. Due in some part to her outrageous fashion sense, Lady Gaga quickly became an international pop icon in 2010 after winning three BRITS and one Grammy Award in the space of several weeks. She continued her winning streak in 2011 by winning another three Grammies. Artist biography compiled by BDS/West 10. All rights reserved