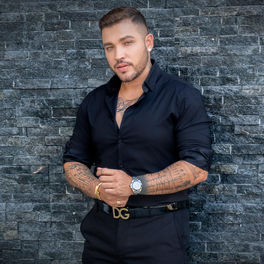 Jessi Uribe was born in the city of Bucaramanga on March 22, 1987 He grew up in a musical environment, his father Fernando Uribe, a mariachi singer to whom he inherited the talent, took him to his presentations in a recognized nightclub in Bucaramanga from very early on he began to sing in different settings where he found a taste for the popular and ranchero genre. In 2008 he appeared in a contest called LATIN AMERICAN IDOL where he was chosen from among 30,000 participants and only 20 artists from Colombia came to represent us in Argentina, thus becoming part of the 50 best in Latin America Another of his talents and passions is composing since he writes about his experiences or that of his friends, thus managing to transmit those stories to his followers. His lyrics have already been recorded by great artists in different genres, in the popular genre Francy popularly recorded "Leave it free and now if you are looking for me" which are part of his new album, he is also preparing collaborations with other artists of popular music. In the year 2017, he participated in the Conch Channel contest "At another level" contest with which he raised the popular genre and demonstrated the union of his colleagues who supported this process. After the success obtained with “Dulce Sin” with which it occupies the first positions in the national charts and for 10 consecutive weeks as number one in the genre charts, the revelation artist Jessi Uribe presents his most recent single “El Último No”. The single was recorded at the Salvaje Producciones studios in Medellín, Antioquia under the production of Mano de Obra; The composition was in charge of Carlos Franco, Jessi Uribe and Rafael Mejía Jr. and mixing and mastering by Jorge Parra Jr. Instruments such as the accordion, the guitar and the trumpet recreate the history of a relationship full of doubts and betrayal, where it is the woman who plays with the feelings of her partner and is not able to face the consequences of her actions. The official video for the single was shot in Piedecuesta, Santander, at the Villa Helena kennel, Mesa de los Santos; under the direction of Edwin Jaimes and the audiovisual company Disuart, using elements such as horses giving a quite rustic and natural touch. His recent release is titled "If You See Me Crying"