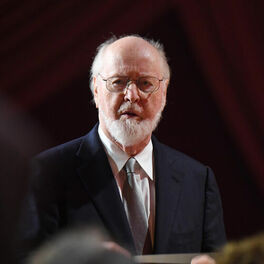 Across The Stars (Deluxe Edition)

We Wish You A Merry Christmas

Pops Out Of This World

John Williams is known as the most successful and popular composer of film music that Hollywood has ever produced. Movies with Williams' music have grossed more than $20 billion worldwide and that's just since he created the memorable theme for 'Jaws' in 1975; he had scored dozens of pictures before that including many blockbusters and hundreds of television shows. The themes for 'Star Wars', 'Raiders of the Lost Ark', 'Close Encounters of the Third Kind', 'Superman', 'Harry Potter and the Philosopher's Stone' and 'Memoirs of a Geisha' are among his most memorable. He has been nominated for 50 Academy Awards and won five; 15 BAFTA Film Awards and won seven; 67 Grammy Awards and won 23. He has had 46 releases on the Billboard Classical Albums Chart with 33 hits in the top 20 and seven that went to number one. He spent 14 seasons as music director of the Boston Pops Orchestra and fans flock to hear his music played by top orchestras in concerts around the world.

Born in Long Island, New York the son a of a jazz percussionist, he went to the University of California, Los Angeles where he studied composition with revered Italian composer and pianist Mario Castelnuovo-Tedesco. During his military service in the early 1950s, he arranged and conducted music for the US Air Force Band and afterwards attended the Julliard School in New York. He found work playing piano in jazz clubs, accompanying singers and in sessions at film and television studios. He played Henry Mancini's theme for the 1958 TV crime show 'Peter Gunn'. After working as an orchestrator on film scores he began to write music for television shows such as 'M Squad', 'Tales of Wells Fargo', 'Wagon Train' and 'Lost in Space'. He won his first Primetime Emmy Award for 'Heidi' in 1968. He scored Don Siegel's 1964 film 'The Killers' and in 1968 got his first Academy Award nomination for 'Valley of the Dolls' with a second in 1970 for 'Goodbye, Mr. Chips'. He won for 'Fiddler On the Roof' in 1972 and was nominated for 'The Poseidon Adventure' (1972), 'Images' (1972), 'Tom Sawyer' (1973), 'Cinderella Liberty' (1973) and 'The Towering Inferno' (1974).

He has the distinction of writing the music for the last movie directed by Alfred Hitchcock, 'Family Plot' in 1976, and the first feature film directed by Steven Spielberg, 'The Sugarland Express' in 1974. In 1975 came Spielberg's 'Jaws' for which Williams won his second Academy Award and he went on to write the music for more than 20 films for the director including 'E.T. the Extra-Terrestrial (1983) and 'Schindler's List' (1994) for which he also won Academy Awards. His other win was for George Lucas's 'Star Wars' in 1977. He won his first Grammy Award in 1980 for Irvin Kershner's 'Star Wars: Episode V - The Empire Strikes Back' followed by wins for Spielberg's 'Raiders of the Lost Ark' (1981) and 'E.T. the Extra-Terrestrial'. His seven number one hits on Billboard's Classical Albums Chart include 'Schindler's List', 'Summon the Heroes' (1996) with the Boston Pops Orchestra, 'Star Wars: A New Hope' (1997), 'Star Wars Episode I: The Phantom Menace' (1999), 'Star Wars Episode II: Attack of the Clones' (2002), 'Star Wars Episode III: Revenge of the Sith' (2005) and 'Star Wars: The Force Awakens' (2016). In 2017 he scored the music for Spielberg's film 'The Post' and the following year he contributed a track to John Powell's score of 'Solo: A Star Was Story'. Later in 2018 it was announced that Williams would retire after scoring 'Star Wars: The Rise of Skywalker'.