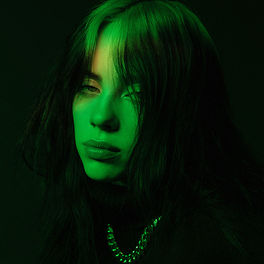 WHEN WE ALL FALL ASLEEP, WHERE DO WE GO?

dont smile at me

Six Feet Under (The Remixes)

No Time To Die

WHEN I WAS OLDER (Music Inspired By The Film ROMA)

come out and play

From the age of 14, American pop singer Billie Eilish began building a music career through promoting herself on social media and by the time she released her debut single 'Ocean Eyes' in 2018 at the age of 17 she had an audience ready and waiting for her material. She was born in 2001 into a family of actors and musicians of Irish and Scottish descent, her full name being Billie Eilish Pirate Baird O'Connell. 'Ocean Eyes' was written by her brother Finneas O'Connell and was originally destined to be played by his own band. After his sister gave a copy of the track to her dance teacher it was decided that Billie herself should record it and it was released worldwide through Interscope Records.

Following the commercial success of 'Ocean Eyes', in 2017 she released the follow-up singles 'Bellyache' and 'Bored', which featured on the Netflix show '13 Reasons Why', as well as her debut EP 'Don't Smile at Me'. March 2019 marked the release of her debut studio album 'When We Fall Asleep, Where Do We Go?', which featured the singles 'Bury a Friend', 'Wish You Were Gay', 'You Should See Me in a Crown' and 'When the Party's Over'. Her 2019 schedule was to include performances at festivals across the world including the Coachella Valley Music and Arts Festival, BBC Radio 1's Big Weekend and the Glastonbury Festival as well as tours of Australia, New Zealand and North America.