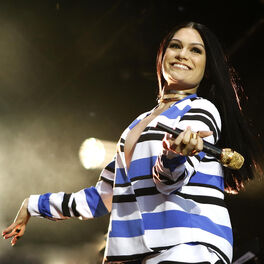 One More Try (from & Juliet)

A graduate of the BRIT School which produced Amy Winehouse, Adele and Leona Lewis, Jessie J's high gloss, technicolour, electro pop burst into the UK charts in 2010 billed as Britain's answer to Gwen Stefani and Lady Gaga. Original signed to the independent Gut Records, she started writing songs for Sony after the label went bust and penned the huge Miley Cyrus US Number 2 hit Party In The USA. Stepping into the limelight in her own right, Jessie's first single Do It Like A Dude (originally written with Rihanna in mind) shot to Number 2 in the UK with its follow up Price Tag (featuring rapper B.o.B) going one better and topping the charts for two weeks. Debut album Who Are You (2011) took her five years to complete, but was hugely successful, reaching Number 2 in the UK and earning a healthy amount of critical acclaim. The album also made a breakthrough in the US, reaching Number 11 in the Billboard Charts and Jessie went over to perform as the house band at the 2011 MTV Video Music Awards - despite her leg being in plaster after she'd fallen off stage a few weeks earlier. She was also awarded the role of coach on the talent show The Voice UK.