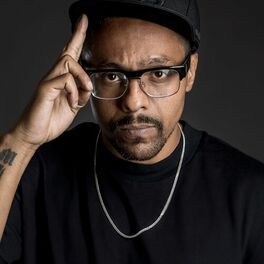 As part of hybrid rap-rock group SpeedFreaks and rasta-funk outfit Planet Hemp, Black Alien was a pioneering force on the hip-hop scene in Brazil in the 1990s, and returned to top form with his landmark solo album 'Babylon By Gus Vol.1' in 2004.

Growing up in the suburbs of Niteroi, Rio de Janeiro, Gustavo de Almeida Ribero was educated at the finest schools in the area but was always an outsider who eventually turned to skateboarding and hip-hop. He teamed up with Claudio 'Speed' Marcio in 1991 to form the duo SpeedFreaks and their explosive collision of hip-hop, funk, punk and samba injected new life into the underground music scene in Sao Paolo and Rio. The album 'De Macaco' would later be regarded as highly influential.

Ribero - now going by the name Gustavo Black Alien - went on to join alternative favourites Planet Hemp between 1997 and 2001 but reunited with Speed again as Black Alien and Speed and the pair famously had their track 'Quem Que Caguetou' used in an advertising campaign for Nissan. Fatboy Slim later remixed the track as 'Follow Me, Follow Me'.

Ribero turned solo in 2004 with the glorious rasta-rap fusion record 'Babylon By Gus Vol.1 - Year of the Monkey' and won over whole a new generation of South American hip-hop fans.

After years of addiction battles and the death of Speed, he went sober, attended rehab and returned with new album 'Babylon By Gus - Vol. II: No Príncipio Era O Verbo' in 2015. With his loose, melodic trademark flow still as warm and infectious as ever, he emerged as a wiser, more soulful character as he entered his mid-40s and later celebrated his sobriety on new single 'Que Nem O Meu Cachorro' in 2019.