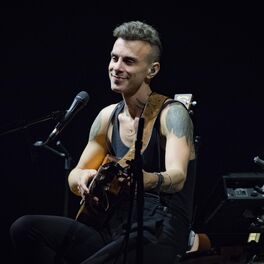 In a Box I: Acoustic Recordings

The Study On Falling (Deluxe)

Now That You're Leaving

Taking his cues from great 1960s troubadours, soul legends and ragged old bluesmen, Israeli singer-songwriter Asaf Avidan specialises in personal ballads and folk-rock stomps, but first became known to European audiences when one of his tracks was re-mixed into a floor-filling, club hit.

As the son of a diplomat, Avidan spent parts of his childhood living in Jamaica and Thailand, later working as an animator in Tel Aviv, but reached a crossroads in his life when he broke up with his long term girlfriend. At the age of 25 he moved back to Jerusalem and kick-started his music career by pouring his soul into a set of smart, introspective, heart-wrenching songs. Although fairly inexperienced, he harvested the inspiration of Leonard Cohen, Billie Holiday and Bob Dylan and formed The Mojos in 2006, getting a reputation for his distinctive, high singing voice and raw, philosophical songwriting skills.

Under the name Asaf Avidan and The Mojos, their debut album 'The Reckoning' went platinum in Israel and their sensitive, bluesy, indie rock jams made them popular stars of the national music scene, but by 2011 Avidan was ready to turn solo. Around the same time, German DJ producer Wankelmut had re-worked his track 'Reckoning Song' into a strutting, thumping, EDM club tune that was gaining popularity on SoundCloud. Avidan was disappointed that his song had been turned from an acoustic, emotional lament into a throbbing, fist-pumping, radio hit, but the 'One Day/Reckoning' remix went on to receive 150 million YouTube views and reach number one in 14 countries. Signing a deal with Polydor, his debut solo album 'Different Pulses' made the top ten in France and Italy in 2012 and his passionate, worldly musings steadily built a healthy cult following across the world. He went on to tour with second album 'Gold Shadow' in the UK and US and his songwriting became more abstract and melancholy on 'The Study On Falling' in 2017.