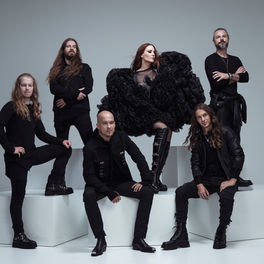 Epica vs. Attack on Titan Songs

Monumental isn’t even a word strong enough to describe the new Epica offering “Omega”, the first collection of all-new material in five long years. On their eighth full-length, the Dutch symphonic metal titans go all cinemascope, in a stunt both effortlessly and cunningly unleashing their biggest, grandest, flashiest opus yet. Formed by composer Mark Jansen after leaving After Forever back in 2002, Epica quickly gained attention outside their home country, taking big steps towards becoming the leading symphonic metal superpower they have long proven to be. On their past seven records so far, they soared from gothic undertones to a broad, epic and triumphant amalgamation of all things monolithic, establishing their unique brand of Simone Simons’ unparalleled vocal excellence with a band both ready to tear down venues around the globe while at the same time installing orchestral splendour, progressive elegance, oriental enchantment, cinematic soundscapes and colossal fury into their trailblazing bombshell sound. This time around, they took a step back before launching forward. For the first time in years, they congregated in a villa in the pastoral beauty of rural Holland, setting up their temporary studio in several rooms. Thus, “Omega” is an album of unity, of friendship, of the close bond the members share. And in the middle of a world in turmoil, of a cataclysmic change in society, Epica somehow managed to create their most spectacular album yet. An album that is seamlessly bringing together metal and orchestra, choir and oriental instruments to a perfect storm constantly emitting goose bumps. Add to that specifically written suites for orchestra and choir, a wide range of ethnic instruments recorded around the world by some of the best native musicians out there and you get something like the ultimate Epica album you never dared dream of. In short: They outdid themselves. Once again. And still managed to keep the songs approachable and wickedly catchy. With its larger-than-life epic anthems, “Omega” is made for their upcoming live shows. From “Abyss Of Time”, a storming beast of a song, via the eerie “The Skeleton Key” and the oriental charm that is “The Seal Of Solomon” to the ultimate battle cry “Freedom – The Wolves Within” and the overwhelming sadness residing within the heartbreakingly beautiful “Rivers”, “Omega” displays everything Epica has to offer. And, quite astoundingly, even more.