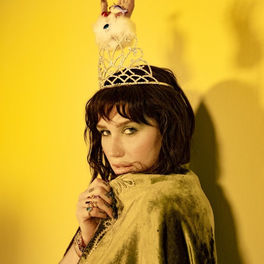 I Am The Dance Commander + I Command You To Dance: The Remix Album

The daughter of struggling singer-songwriter and single mother Pebe Sibert, Kesha was brought up in relative poverty in Los Angeles. But after moving to Nashville, Tennessee she accompanied her mother to gigs and together they started writing songs. Kesha dropped out of school at 17, returning to LA to launch her own career where she became friends with Paris Hilton, and sang backing vocals on Hilton's single 'Nothing in This World'. She subsequently worked with various writers, sang backing vocals on Britney Spears' 'Lace and Leather' and appeared in the video for Katy Perry's hit single 'I Kissed a Girl'. Kesha also appeared on Flo Rida's number one single 'Right Round' and finally became a star in her own right with her 2009 debut single 'Tik Tok'.

A number one in eleven countries, 'Tik Tok' achieved 610,000 digital downloads in one week, a record for a female artist. Her debut album 'Animal' was released in 2010, assimilating rap into pop, dance, electro and rock music, topping the album charts in the US and several other countries and selling over two million copies. It also produced three more huge hits: 'Blah Blah Blah', 'Your Love Is My Drug' and 'Take It Off'.

After highly publicised legal battles, with her former managers suing her for a reported $14 million in commission on her deal with RCA, she decided to counter-sue stating the talent agency to which her former managers belonged was unlicensed. All resolved, she released her second album 'Warrior' and its first single 'Die Young'. In 2013 she released 'Timer', a collaborative single with Pitbull, which went straight to number one on the Billboard Hot 100. More legal battles came when she claimed her producer Dr. Luke had, over a period of ten years, assaulted her and subjected her to abuse, both emotional and physical. After a year of court proceedings, Kesha's case was dismissed.

She made her first high-profile appearance, after the ordeal of the previous year, at the 2016 Coachella Festival where she performed a track by Russian DJ Zedd. She embarked on a world tour - 'Kesha and the Creepies: F**k the World Tour' - later in 2016 and announced that she was working on her third studio album. The album, 'Rainbow', was released later in 2017 with the lead single 'Praying' breaking the top 30 in the UK and US. Following a two-year world tour in support of 'Rainbow', she released her fourth studio album, 'High Road', in January 2020.