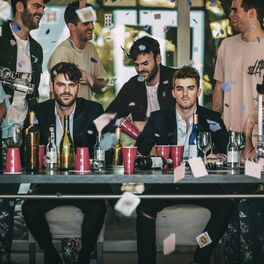 by The Chainsmokers, Illenium, Lennon Stella

Call You Mine - The Remixes

by The Chainsmokers, Bebe Rexha

Kills You Slowly - The Remixes

by The Chainsmokers, Emily Warren

by The Chainsmokers, Drew Love

Everybody Hates Me - Remixes

You Owe Me - Remixes

by The Chainsmokers, Coldplay

All the Hits! Dance Remixed Music

American DJ duo The Chainsmokers had a surprise hit with the novelty song '#Selfie' released in 2014. '#Selfie' was originally offered as a download giveaway but its potential was spotted by Dim Mak Records who repackaged it and streamed it through Republic Records. The song was panned by music critics with Miles Raymer of the Chicago Reader describing it as "garbage, paint by numbers EDM". Despite this and other less than favourable reviews '#Selfie' sold over 60,000 copies debuting at number 55 on Billboard's Hot 100 and continued to sell well during the ensuing weeks suggesting The Chainsmokers had pitched the song, its timing and its title perfectly for the intended audience. Subsequent recordings by the duo displayed a more thoughtful, considered side to The Chainsmokers' songwriting abilities and the band have been quick to capitalise on their success. The single 'Paris' released in early 2017 received over 270 million streams and the official video which featured fashion model Marsha Hunt generated over a million hits on You Tube. The duo continue to rack up impressive statistics amongst their Internet fan base - the single 'Something Just Like This', a collaborative effort with Coldplay, received over nine million plays in a single day. Artist biography compiled by BDS/West 10. All rights reserved