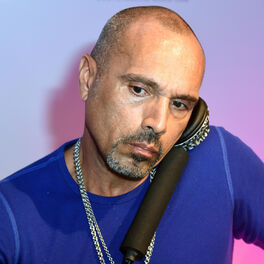 It's All Because of You

Away from the Storm

Many Voices of Hawaii

The Greatest Dance Tracks Ever

Who Do You Think You Are / Mama

There at the birth of house music in the mid-1980s, New Yorker David Morales went on to become a superstar DJ and legend of the dance scene for over 25 years. Raised in Brooklyn by Puertan Rican parents, Morales was shot in the leg as teenager but escaped a tough upbringing by DJ-ing at legendary disco clubs such as the Paradise Garage in the late 1970s. He started producing early house records with Frankie Knuckles and later broke into the mainstream pop charts with remixes for Madonna, Seal, U2 and Janet Jackson, before releasing debut album The Product (1993) and underground hit single Gimme Luv. His work on Mariah Carey's Fantasy album helped earn a Grammy Award for Remixer of the Year in 1998 and he topped the dance charts with anthem Needin' U; but he was most at home at legendary Ibiza nightclub Pacha, where he spent a nine year residency. Morales went on to release two successful albums of original material Two Worlds Collide (2005) and Changes (2012) to confirm his position as one of the world's most in-demand DJs, producers and remixers.