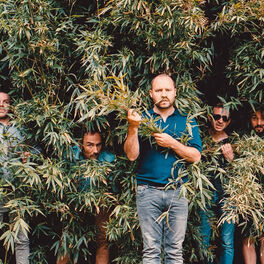 Not Easy to Cook

No Mercy for Love

Kings of the Attic

BEST OF DU BEST OF

If Cannibale’s members brought their breakfast back up when talking about "Not easy to cook", their listeners would be surprised. These fortysomethings being signed by Born Bad Records, the image of greaser - looking garage rockers would come to mind, but with bits of exotica stuck between the teeth, Nino Nardini & Roger Roger’s "Jungle Obsession" spilled on the table, and plastic-bottled tropical glampuked by some even more stupid incarnation than Wayne's World’'s Mike Myers. The stage is set, now you have to clean up everything. “Indolent rhythms invoking Latin America and Africa.”(Mowno) “Nomadic, willingly sunny garage rock.”(Libération) "Songsthat provoke visions or hallucinations." (France Inter)