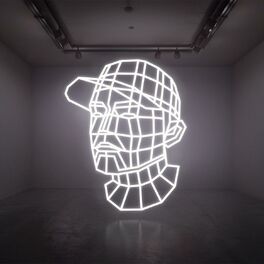 The Mountain Will Fall

Reconstructed : The Best Of DJ Shadow

The Less You Know, The Better

The Less You Know, The Better (Deluxe Edition)

Scale It Back EP

by DJ Shadow, Run The Jewels

This is: Furious (Music From Fast & Furious 8)

Mark Ronson Presents The Music Of "Spies In Disguise"

While his schoolfriends thrashed away on guitar, Josh Davis (aka DJ Shadow) was one of the few white kids in 1980s suburban San Francisco to take to the decks, inspired by the early hip hop of Public Enemy and Eric B. Learning his trade on University of California radio, DJ Shadow became one of the stars of the pioneering London label Mo' Wax in the 1990s, bringing together a head-rushing blitz of different beats, breaks and samples from all manner of genres. His landmark debut Endtroducing.... (1996) went down in the Guinness Book of World Records as being the first album to be made entirely of samples and was named by TIME magazine as one of the top 100 records of all time. Teaming up with his label boss James Lavelle as UNKLE, Shadow produced the trip-hop classic Psyence Fiction (1998), which featured collaborations with Thom Yorke, Richard Ashcroft and the Beastie Boys' Mike D. Continuing to produce film soundtracks, remixes and mixtapes, his later albums, The Private Press (2002) and The Outsider (2006), continued to push the boundaries of experimental hip hop and DJ Shadow remains one of the most respected producers in the world.