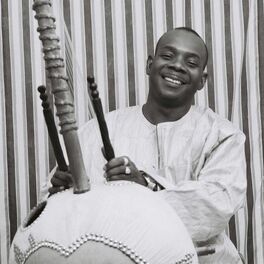 In the Heart of the Moon

Dinner and Entertainment, Ambient: Music for

by Yo-Yo Ma & The Silkroad Ensemble

10 Años Around The World

Born into a family of traditional African griots (storytellers, musicians, poets and bards) that date back 71 generations, Toumani Diabate became a virtuoso kora player and one of the leading stars of World music. Taught the 12-string harp-like instrument by his father Sidiki Diabate (himself a legendary player), he toured the UK together in 1987 before his stunning debut Kaira (1988) mixed the traditions of Mali with flamenco, jazz and blues influences. It led to collaborations with British folk artist Danny Thompson, American bluesman Taj Mahal and Spanish group Ketama as Diabate experimented with different cultural clashes and musical traditions. He returned to his roots by teaming with fellow kora player Ballake Sissoko on New Ancient Strings (1999) but continued his musical exploration by working with Björk, Damon Albarn and Brazilian rock composer Arnaldo Antunes, while also featuring heavily on Ali Farke Toure's Grammy Award-winning album In the Heart Of The Moon (2005).