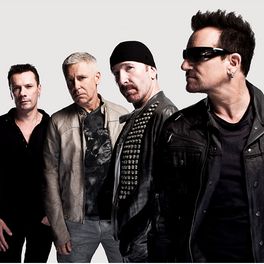 When drummer Larry Mullen advertised for musicians on the Dublin Mount Temple Comprehensive School message board in 1976, he couldn't have imagined he was lighting the flame for one of the biggest bands in rock history. The advert was answered by singer Paul Hewson aka Bono, guitarist David Evans aka The Edge and bass player Adam Clayton and, after initially playing covers, they began writing their own material and became U2.

In 1978 they won studio time to record their first demo at a talent show in Limerick which led to the release of their first EP 'Three'. This in turn led to a major label deal and their debut album 'Boy' was released in 1980. Dynamic live shows and epic, powerhouse songs like 'Sunday Bloody Sunday' and 'New Year's Day' attracted a fanatical following, which escalated dramatically following a memorable set at Wembley's Live Aid concert in 1985.

One of their biggest-selling albums, 'The Joshua Tree', was released in 1987 and featured some of their best-known singles including 'With Or Without You', 'I Still Haven't Found What I'm Looking For' and 'Where the Streets Have No Name'. The double album 'Rattle and Hum' followed the year after with nine studio tracks and six live performances of tracks from 'The Joshua Tree'. They received heavy criticism for the album and hit back with 'Achtung Baby' in '91. The album put forth U2's change in musical direction, as they channelled inspiration from industrial and dance music. 'Zooropa' followed in '93 with 'Pop' in '95 and 'All That You Can't Leave Behind' in 2000. 2003 saw their next award-winning album in 'How to Dismantle an Atomic Bomb'. They followed up with 'No Line On the Horizon' in 2009, 'Songs of Innocence' in 2014 and 'Songs of Experience' in 2017.