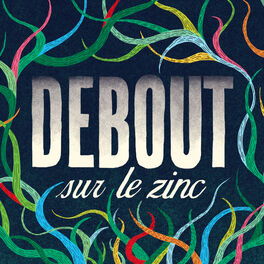 2000 concerts or so… Few french artists have set foot on stage with as much consistency as Debout sur le Zinc. Six boys form the band, all of them multi-instrumentalists, and play a music that is easily accessible while subtly sophisticated; twenty-five years of shared history, an exceptional longevity for the french scene. At the beginning, in 1995, the band’s genealogy augurs diversity: Simon Mimoun and Olivier Sulpice have been playing Irish folk music together for a few years, Cedric Emolieff comes from a Rock band and the first version of Debout sur le Zinc tags along with the wave of alternative music which is then conquering the french scene and festivals; Têtes Raides, La Tordue, Louise Attaque… First album release in 1999, on which features Romain Sassigneux. A few years later, Thomas Benoit and Chadi Chouman join at last. The challenge was not to produce a sort of rock music whose only virtue is to go out burning, but to pursue nowadays an enchantment enterprise of the everyday life that unites the poets of french song since Charles Trenet, Georges Brassens and Boris Vian. A standard of depth and clarity, formal freedom and sincerity, that underlies the lyrics of Simon and Romain, the two lead singers who compose and write the Repertoire of Debout sur le Zinc. Their songs create a very personal bond with the audience, addressing at once the private and the collective, the smile and the melancholy, the autobiography and the world… The shared instrumentarium is broad; Simon plays the violon, the viola, the trumpet, the keyboards and the horn; Olivier, the banjo, the mandolin and the Irish flute; Cedric is at the drums and percussions; Romain at the clarinet and guitar; Chadi, at the guitars and trumpet… When in studio, everyone happily plays several instruments, and then every song is reinvented for the stage… With an insatiable appetite for musical innovations, the most remarkable miracle is probably this specific sound identity of the band, palpable at the very first notes of a song, although the arrangements change for everyone of them - straight to the point electric, drunken haversack, street jazz, balkan meets celtic, surrogate “Jacques Brelism"… “We gladly self indulge. We don’t define ourselves as an experimental band but we nourish ourselves with our respective musical journeys”, admits Thomas. And Simon adds: “No matter how many giant steps we’ve made, we still resemble ourselves.” Indeed, each of the ten albums of Debout sur le Zinc is also an adventure in itself, that of a band encountering or conquering new fields, often nourished by collaborations and outside artistic projects of its members. Absolute freedom in the studio and Bob Dylan type Never ending tour, on every type of francophone stage - Olympia, Zenith, small rock gigs, Italian-style theatres and state theatres for the Boris Vian show in 2019-2021… Coming from classical, rock, folk, or yet again other musical fields, each member of Debout sur le Zinc is part of the construction of this unique adventure, ongoing for twenty-five years, as rich in the studio as on the stage - as if they had decided to make of their meeting point, the heart of a new territory.