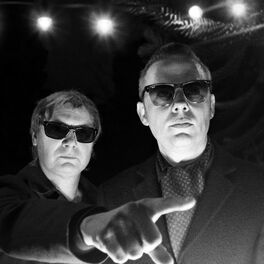 The Best of Hooverphonic

The President Of The LSD Golf Club

Sit Down And Listen To

Release Me (Shades Of Green Remixes)

I Know What You Did Last Summer The Album

With their dreamy, glacial, electro ballads and orchestral pop bliss, Hooverphonic were part of the European trip-hop scene in the mid-1990s, quickly finding themselves billed as Belgium's equivalent to the likes of Portishead and Goldfrapp.

Formed in the city of Sint-Nikklas in East Flanders, bass player Alex Callier was working as a sound engineer at the TV channel VRT when he met keyboardist Frank Duchene and guitarist Raymond Geerts, bonding over post-punk bands, film scores, hip-hop and minimal electronica. With vocalist Liesje Sadonius on board, they used loops and hushed melodies to create warm, dubby, synth-pop grooves on debut album 'A New Stereophonic Sound Spectacular' and its popularity spread to the UK and the US, landing them support slots on tour with Massive Attack, Moloko, Morcheeba and Fiona Apple.

Their single '2Wicky' - which sampled Isaac Hayes' version of 'Walk On By' - was used in the movies 'Stealing Beauty' and 'I Know What You Did Last Summer', but Sadonius was replaced in the band by 18-year-old singer Geike Arneart and Duchene left after second album 'Blue Wonder Power Milk'. As one of Belgium's most successful and influential groups, they continued to make downbeat, cinematic Euro-disco trips on 'The Magnificent Tree' in 2000, whilst 2002 album 'Hooverphonic Presents Jackie Cane' was a melodramatic concept album based on a fictional singer and her fatal relationship with her twin sister which took the band to number one in Belgium for the first time.

They also recorded a theme tune for the European Football Championships in 2000 and made a live record with a full orchestra, but Arnaert pursued a solo career after the wonderfully odd 'The President of the LSD Golf Club' and was replaced by Noemie Wolfs on 'The Night Before' in 2010 and 'Reflection' in 2013. Remaining daring, eccentric, modern psych-pop auteurs, Callier also became a judge on TV talent show 'The Voice of Flanders' before the band returned with chart topping album 'In Wonderland' in 2016 and introduced new front woman Luka Cruysbergh on singles 'Romantic' and 'Uptight' in 2018.