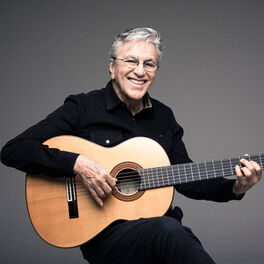 The Best of Caetano Veloso

Sax on the beach

A key member of the counter-culture movement in Brazil in the 1960s, Caetano Veloso was a pop provocateur who championed experimental art forms and radical philosophical and political ideas, but later became recognised as one of the country's great songwriters and composers.

Born in a small north eastern town in Bahia, Veloso first discovered the bossa nova music of Joao Gilberto alongside a wealth of Afro-Brazilian sounds when he moved to the port city of Salvador at 17-years-old, and soon made his way to Rio de Janiero, where his sister Maria Bethania had begun a successful singing career. By winning a talent competition he landed a deal to record his gentle, acoustic debut 'Domingo' with singer Gal Costa, but it was a few months later that the Tropicalismo art movement started growing and Veloso became influenced by the idea of fusing traditional Brazilian culture with rock music, film, theatre and poetry in a modernist, avant garde style. He created his legendary self-titled solo record in 1968 and featured heavily on the landmark album 'Tropicalia: Ou Panis et Circencis', which brought together scores of like-minded musicians, offered a manifesto for the new wave of art and was seen as Brazil's answer to The Beatles 'Sgt. Pepper's Lonely Hearts Club Band'. The ground-breaking psychedelic style caused huge controversy and after several arrests and attempts to ban their music, Veloso and his cohort Gilberto Gil were forced to leave the country by the military dictatorship and live in exile in London, England.

Incorporating jazz, folk and the music that he encountered in Europe, Veloso marked his return home in 1972 with the acclaimed 'Transa' and started to find audiences in America with 'Joia' and 'Cinema Transcendental' in the late '70s. As much influenced by Jean-Paul Sartre, Dadism, Bob Dylan and The Rolling Stones as he was bossa nova and traditional singers, Veloso's reputation spread internationally in the 1980s and his eclectic career saw him work with New York experimental producer Arto Lindsay, headline the Carnegie Hall and win two Grammy Awards for Best World Music Album in 2000 and 2001. His work has influenced the likes of Robert Palmer, David Byrne, Beck and Animal Collective and even after 50 years in the music industry he remains a prolific and ground-breaking force.