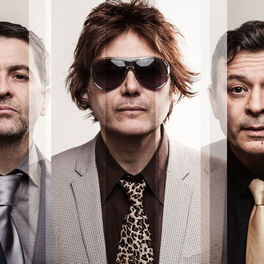 Send Away The Tigers

Everything Must Go 10th Anniversary Edition

Growing up against the backdrop of the miner's strike, listening to punk rock, reading William Burroughs and studying Lenin, four school friends from South Wales were never average working class kids. Alienated and brimming with political rage, they blazed a trail of androgynous glamour, heartfelt sloganeering and teenage angst on their debut album 'Generation Terrorists' in 1992 with a darker side emerging on 'The Holy Bible' in 1994 as chief lyricist Richey Edwards became increasingly depressed. Edwards vanished in 1995 and though his body was never found, he was officially presumed dead in 2008. The remaining members continued as a trio, bouncing back with the number one single 'Design for Life' and album 'Everything Must Go' (1996).

'If You Tolerate This Your Children Will Be Next' came in 1998 and was their first UK number one single with the album 'This Is My Truth, Tell Me Yours' also hitting the top spot. Maintaining their popularity, they used Edwards' final lyrics, written shortly before his disappearance, on their ninth studio album 'Journal for Plague Lovers' (2009), with the intention that the album would form Edwards' legacy. They followed this up with 'Postcards from a Young Man' in 2010 and 'National Treasures', a collection of the band's singles, in 2011. 'Rewind the Film' came in 2013 and achieved a number four position on the UK Albums Chart. 'Futurology' followed the year after and got them to number two on the UK Albums Chart. They commemorated the 20th anniversary of 'The Holy Bible' with a re-release of the album along with an acoustic session, mastertapes and a book of photos and handwritten lyrics and notes.

Their 13th album 'Resistance Is Futile' was released in 2018 and went to number two in the UK Albums Chart. The lead single 'International Blue' topped the Official Vinyl Chart and was followed by 'Distant Colours' and an announcement of a tour.