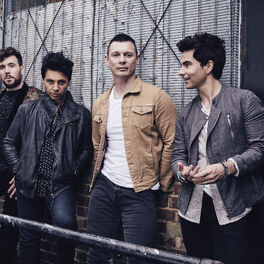 Scream Above the Sounds (Deluxe Edition)

Graffiti on the Train

Word Gets Around - Deluxe Edition

Keep Calm And Carry On

You Gotta Go There To Come Back

Stay at Home with James Arthur

Here On Earth - Music From The Motion Picture

Rising to prominence from the dying embers of the Britpop scene in 1997, Kelly Jones's husky purr helped turn Stereophonics' early singles 'Local Boy in the Photograph' and 'Traffic' into small hits and take their debut album 'Word Gets Around' (1997) to number six in the UK Charts.

Establishing themselves as hard-working indie-rockers, they went on to release chart-topping albums 'Just Enough Education to Perform' (2001), 'You Gotta Go There to Come Back' (2003), 'Language. Sex. Violence. Other?' (2005) and 'Pull the Pin' (2007). A steady flow of hits included 'Bartender and the Thief', 'Mr Writer' and 'Have a Nice Day', while 'Dakota' gave them their first UK number one in 2005. Headlining slots at the Reading and Leeds Festivals in 2000, V Festival in 2002 and Isle of Wight Festival in 2004 and 2009 were topped by a sold-out Christmas show at Cardiff's Millennium Stadium in 2004.

In 2010 drummer Stuart Cable was found dead in his home after an alleged drinking binge. With this and several other factors, including the end of their contract with Universal, Jones made a decision to take a break. They still continued to work on new material however, and their eighth album 'Graffiti On a Train' was released in 2013. 'Keep the Village Alive' followed in 2014 with 'Scream Above the Sounds' in 2017. Their eleventh album, 'Kind', was released in 2019.