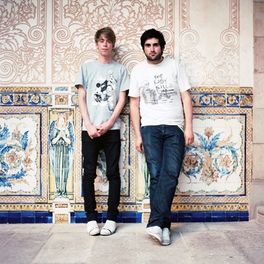 I Love You, Dude

Jens 'Jence' Moelle and Ismail 'Isi' Tufeki first met at the Underground Solution record store in Hamburg and were soon hired by the shop's manager to DJ at local club nights. They started editing together The White Stripes' famous 'Seven Nation Army' guitar riff with a throbbing electro pulse, making their own original track 'Idealistic' with scuzzy synths and Moelle's warped vocal cry, before signing to cult French label Kitsune. Their remixes of Depeche Mode, The Futureheads and Tiga quickly became popular soundtracks at indie-leaning nightclubs in the UK, and their ideas chimed perfectly with the nu-rave, electro-clash trends of the moment and bands such as Klaxons and Test Icicles. Their 2007 debut album 'Idealism' continued to morph electro bleeps and belches with glitchy, buzzsaw synths and they built a live set that included drums and blazing light shows, and set them up for appearances at the world's biggest festivals.

Their second album 'I Love You Dude' in 2011 included the track 'Forrest Gump' which was written with Julian Casablancas from The Strokes; they also recorded music for the soundtrack of video game 'Syndicate' as their storms of volcanic, robotic dancefloor chaos found a new kinship with the burgeoning dubstep scene and acts such as Skrillex and Modestep. A heavy touring schedule meant a five-year wait for new material, but after they returned to the studio they released the pounding, ambient, prog-influenced 'Mirage' in 2016.