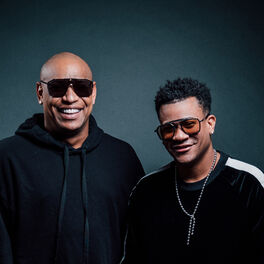 Stop Me from Falling

Gente de Zona are a Cuban reggaeton duo formed by the rappers Alexander Delgado and Michel Delgado in 2000. Michel left in 2005 to be replaced by Jacob Forever and band changed musical direction with a focus on being more commercial and incorporating Cuban rhythms and influences in the music.

In 2014 the band formed a collaboration with the Lain pop superstar Enrique Inglesias who sang on their track 'Bailando'. The track and its accompanying video catapulted the name of the group onto the international stage garnering three Latin Grammy Awards along the way. The song was originally recorded in Spanish but various versions have subsequently been released. The significance of the song for the band can be judged by its reception by Latin audiences where it has received over 2.5 billion views on YouTube, the first Spanish language music video to have been viewed over a billion times. In contrast the English version has received 270 million views.

Gente de Zona have since continued their achievements, their most successful album to date being the critically acclaimed 'Visualizate' which they released in 2016.