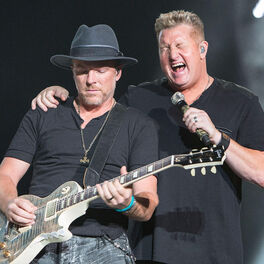 Back To Us (Deluxe Version)

Back To Us (Deluxe Version / Big Machine Radio Release Special)

The Greatest Gift Of All (Big Machine Radio Release Special)

The Greatest Gift Of All

Me And My Gang

Music From and Inspired By WE WERE SOLDIERS

Cousins Gary LeVox and Jay DeMarcus met Joe Don Rooney when he was playing guitar in Chely Wright's band, which DeMarcus was at the time leading. LeVox and DeMarcus were also performing together as a duo and asked Rooney to fill in for their guitarist one night. When singer Mila Mason heard the trio play, she recommended them to Lyric Street Records A&R man Doug Howard who invited them in for a meeting. They left with a recording contract and a debut single, 'Prayin' for Daylight'.

The single reached number three in the Billboard Country Charts and set them on the road to success. Their self-titled debut album managed the same position, with its three other singles - 'This Everyday Love', 'While You Loved Me' and 'I'm Movin' On'' - all faring in the top ten, the latter being awarded Song of the Year by the Academy of Country Music. Their second album 'Melt' was released just a year later in 2002 and gave them their first number one single in the shape of 'These Days', followed by 'Mayberry' which also made the top spot. More success followed as their reputation grew and they continued to produce hit records including 'Feels Like Today' - which featured their number one cover of Marcus Hummon's 'Bless the Broken Road' - 'Me and My Gang', 'Still Feels Good' and 'Unstoppable'.

When Lyric Street Records closed their doors in 2010, Rascal Flatts signed with Big Machine Records and put out their first release under their new label: 'Nothing Like This'; the album's lead single 'Why Wait' became their eleventh number one. With their career going up and up, the band were honoured with a star on the Hollywood Walk of Fame and inducted into the Grand Ole Opry in Nashville. In 2012 they announced they were embarking on a new business venture: restaurants. The Rascal Flatts Restaurant Group was founded later that year with a plan to roll out Rascal Flatts American Bar & Grill themed restaurants all over America and Canada.

Although branching out into new areas, the music remained at the forefront of their minds and they announced a new album and it's lead single of the same name, 'Rewind', in 2013. The album made it to number one on the Billboard Top Country Albums with the single reaching number four on the Hot Country Songs Chart. The single 'Yours If You Want It' was released in 2017 ahead of their tenth album 'Back to Us'.