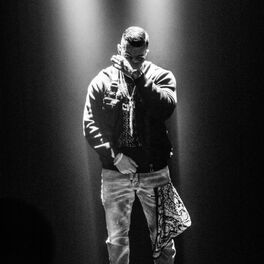 Controversial German rap star Farid Bang is part of a new generation of gangsta rap stars from Europe who, inspired by the US originators, are crafting their own provocative rhymes and bad boy image.

Born in Spain but raised in Dusseldorf from the age of eight, Bang (real name Farid El Abdellaoui) comes from a Morrocan family and started rapping at the age of 19 with his friend Tekken and was signed to Eko Fresh's label German Dream Entertainment in 2005. Initially performing under the name Farid Urlaub, he made his reputation through rap battles and mixtapes, before spitting a barrage of sharp-tongued put downs and potent diss tracks on his debut album 'Asphalt Massaka' in 2008.

Rivalries with MOK, Aggro Berlin and Fler further increased his notoriety and he collaborated with Kollegah on album 'Jung, Brutal, Gutaussehend' in 2009 before releasing his solo record 'Banger Leben Kurzer' in 2011 which featured guest appearances from Summer Cem, Ko and Haftbefehl. His fast, double-time delivery and macho tales of street life became his trademark and both his second collaboration album with Kollegah and his solo effort 'Killa' went on to top the German charts.

With his growing profile critics began citing his lyrics as misogynistic and homophobic and when Kollegh and Bang won a prestigious Echo Music Prize for their joint 2017 album 'Jung, Brutal, Gutaussehend 3' they became embroiled in a major controversy over references made to Auschwitz and the Holocaust. Several other nominated artists refused to accept their awards and although a criminal investigation into the pair was dropped, it was decided that the Echo Music Prize would be abolished. The duo later apologised and returned in 2018 with EP 'Nafri-Trap' and singles 'All Eyez On Us' and 'Mitternacht 2'.