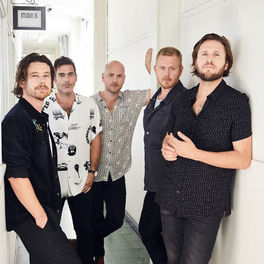 Live at the Hordern Pavilion

The Head And The Heart

Matthew and the Atlas

Boy & Bear set the social media scene abuzz last month after teasing fans of new music and a Sydney showcase. The wait is now over with the band returning with a triumphant new single, ‘Hold Your Nerve’, their first new music since the release of the soon to be platinum, #1 ARIA album, Limit of Love (2015). Along with the release of ‘Hold Your Nerve’, the five-time’s ARIA winners have announced their global tour beginning with headline shows in Brisbane, Perth, Melbourne and Sydney in August then shows in North America, UK and Europe. Tickets for the 'Hold Your Nerve Global Tour' are onsale from www.boyandbear.com After the most tumultuous period of the band’s lives both personally and professionally, ‘Hold Your Nerve’ is an upbeat, optimistic song in which the group channel their trademark penchant for organic, seventies sounds into one of their most direct, modern and addictive songs to date. Produced by Boy & Bear and Collin Dupuis (The Black Keys; Lana Del Rey) and mixed by Tom Elmhirst (Amy Winehouse, Beck, Adele), the single is the first taste of their fourth studio album penciled for a release later this year. Even though on the surface ‘Hold Your Nerve’ charts the story of front-man Dave Hosking and his current partner’s failed first attempt at their relationship, dig deeper and it reveals the backdrop of a debilitating illness front-man Dave Hosking has been dealing with since 2011. Showing early symptoms of exhaustion – Dave was initially misdiagnosed with chronic fatigue syndrome and then depression and anxiety. The symptoms soon intensified to include cognitive issues which robbed Hosking of the ability to piece together lyrics and write songs. Hosking’s struggled whilst writing and recording Limit of Love and as his health continued to decline he noticed a deterioration in his eyesight and a constant ringing in his ears. After working with a myriad of specialist’s, hope came in late-2015 when doctors detected a gut bacterial issue that has been poisoning his nervous system. Medication and a radical alteration of his diet offered minor improvements, to the point where he could commit to touring Limit of Love. By the end of the cycle, however, Hosking had deteriorated further. For an act at the peak of their career, with a #1 album in Australia and selling out venues such as the Hordern Pavilion and Riverstage, the band made the decision to take 2017-18 off the road to give Dave time to focus on his health. it was a decision fraught with uncertainty and anxiety. But there was no question that Hosking's wellbeing was the priority. Whereby Limit of Love was written collaboratively, the band spent months of 2017-18 trying out new writing ideas as Hosking rode an emotional and physical rollercoaster. Dave made significant progress during this period when he was introduced to a new treatment, called Faecal Microbiota Transplant (FMT). Also known as a stool transplant, FMT is the process of transplanting faecal bacteria from a healthy person into a recipient. His donor, Harry was brought to Nashville for the writing and recording of the new album. Prior to the FMT treatment, Hosking had been unable to conjure lyrics or remember melodies long enough to put them to use. For the first time since recording Limit of Love, he experienced enough relief to allow him to contribute to the songwriting sessions for the new album. While Dave’s health remains a work in progress, both he and the band can finally look to the future with optimism. ‘Hold Your Nerve’ is their first step back into the light.