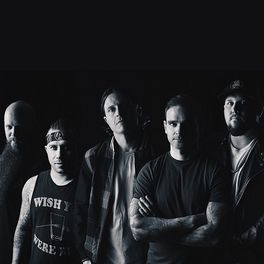 In Our Wake (Deluxe Edition)

The Best Of Atreyu

A Death-Grip On Yesterday

Covers of the Damned EP

Fractures in the Facade of Your Porcelain Beauty - EP

The Time Is Now (Alternate)

The Time Is Now

Atreyu, named after the character of the same name from the fantasy novel The Neverending Story, are a heavy metal band that exploded onto the scene at the beginning of Noughties. As a traditional heavy metal band, Atreyu combine screaming vocals with heavy drumbeats and the overall noise from the riffs of their untuned guitars, giving the band a cult following within the heavy metal demographic. Atreyu began their career playing small-scale live shows within California, where they sold their independently produced EP Visions. By 2001, the band had been signed to Victory Records, and released their first full length album Suicide Notes and Butterfly Kisses in mid-2002, expanding their fan base within the underground metal scene, but not achieving mainstream success. However, their second album, The Curse, sold over half a million copies, and use of their songs in films such as Mr and Mrs Smith, Underground: Evolution and games such as Madden '07 and Burnout 3 gained the band further fame. Atreyu have also successfully toured with Linkin Park, Hawthorne Heights and Escape the Fate.