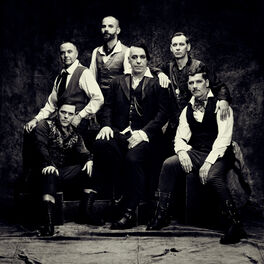 Led by former Olympic swimmer Till Lindeman, Rammstein emerged from East Germany after the fall of the Berlin Wall as part of the Neue Deutsche Härte scene to become internationally acclaimed, hard-rocking metal stars.

Named after a disaster at an air show in small town Ramstein-Miesenbach, the band's full-throttle mix of metal, electronic beats and industrial angst made them famous across Europe before support slots with Korn and Limp Bizkit helped make a breakthrough in the US. Renowned for huge pyrotechnics at their startling live shows, their fifth album 'Rosenrot' (2005) confirmed their worldwide reputation by breaking into the US top 30, paving the way for tours to Chile and South Africa, a headline slot at the Sonisphere Festival and a sell-out show at New York's Madison Square Garden.

'Liebe Ist Für Alle Da' in 2009 brought even more success reaching number 13 in the US and number 16 in the UK - a remarkable feat for a band who sing almost entirely in their native German. After some time away from the studio, focusing on live work, the band announced in 2017 that new material was on its way.

Following up on their promises two years prior, the band returned in 2019 with singles 'Deutschland' and 'Radio' before the release of their self-titled seventh studio album.