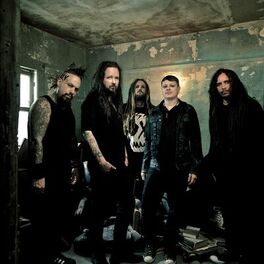 The Serenity of Suffering (Deluxe)

The Path Of Totality (Special Edition)

Korn III: Remember Who You Are (Special Edition)

See You On the Other Side

Take A Look In The Mirror

The A to Z of Rock

Between the 1990s and 2000s Korn became one of the most popular alternative rock bands and helped to make the nu-metal genre one of the most prominent of the early noughties. Members of former band L.A.P.D. recruited Brian Welch and Jonathan Davis to form Korn, based in Bakersfield, California. The band's first single, 'Blind', received considerable airplay in the US and as a result the band gained popularity, embarking on an intense schedule of live shows throughout the States.

Their dynamic live shows helped them to build a dedicated fanbase, and they entered the Billboard 200 with their self-titled debut album in 1996, reaching number 72. The band went on to support Ozzy Osborne on his US tour alongside Deftones, as well as opening for Megadeth and Fear Factory, and from this gained widespread fame. They continue with frequent live performances, which have gained cult popularity for the band members' on-stage antics including wearing black jumpsuits and animal masks.

In 2005, before the release of 'See You On the Other Side', Brian Welch left the band to pursue his religious beliefs and spend more time being a father. The following year, original drummer David Silveria also departed from the band. 2007 saw the release of 'Unitled' which went in and peaked at number two on the Billboard 200 and the band went on to welcome Ray Luzier on drums.

Later, in 2012, Welch returned to the band in time for their eleventh studio album, 'The Paradigm Shift' (2013), which reached number one on Billboard's US Independent Albums Chart and the US Top Hard Rock Albums Chart. 'The Serenity of Suffering' followed in 2016 which reached the top ten in eleven countries around the world.

In 2019, Korn returned with single 'Cold' which features on their 13th studio album, 'The Nothing' released in September of the same year.