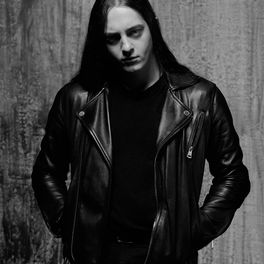 I Am the Night

The Wrath of Code

PERTURBATOR – who received massive acclaim as the face of retro-inspired dark electronic music – breaks free from the ubiquitous cliches of “synthwave.” If the “New Model” EP [2017], signaled a drastic sonic departure in Perturbator’s oeuvre, “Lustful Sacraments” witnesses further reinvention – ushering fans into deeper uncharted territories. “Lustful Sacraments” represents James “Perturbator” Kent's most mature work to date, merging the dark synthesized tones that made Perturbator a household name with classic post-punk, goth, and heavy techno rhythms. The album weaves Perturbator's classic cinematic atmosphere with thundering drums, subtle electronic melodies and in-your-face guitar hooks. In 2012, Perturbator's onslaught of initial releases (“Night Driving Avenger,” “TERROR 404,” “Nocturne City” and “I Am the Night”) rocketed him through the ranks of retro-electronic music producers – receiving tons of accolades and comparisons to the likes of JOHN CARPENTER, TANGERINE DREAM, GOBLIN, and VANGELIS. As he continued to hone his skills, Perturbator never stopped pushing for something deeper. This experimentation took a darker turn with his 2014 smash breakthrough “Dangerous Days” and went violently into the mire with 2016's Billboard-chart topping “The Uncanny Valley.” But James “Perturbator” Kent continued to feel the limitations of the genre he helped define. 2017 saw the surprise release of “New Model.” The groundbreaking EP eschewed pop culture references and brought on new influences, ranging from KRAFTWERK to LORN to NINE INCH NAILS. Kent wanted to explore releasing music on its own merit, rather than regurgitating nostalgic tropes, believing they interfered with the subject matter. Five years since the release of his last album, “Lustful Sacraments” showcases the total evolution of an artist. The album continues Perturbator's nihilistic legacy of exploring future worlds, ones regarding humanity's inevitable downfall. “It's an album about bad habits, dissatisfaction and addiction. An overall look at how we, as a species, lean towards self-destruction,” James Kent states. Musically, “Lustful Sacraments” takes influences from post-punk and goth from the 1980s and early 1990s, while retaining the oppressive, dark electronic tones Perturbator is known for. At the crossroads of everything achieved, “Lustful Sacraments” will be the final release by Blood Music, the perfect ending statement to an iconic 8-year-long collaboration. Following the difficult worldwide situation in 2020, Perturbator will return to the stage in October- November 2021, supporting “Lustful Sacraments” on stage with a brand new live show and bringing the album into further sonic dimensions. A world tour is planned for 2022-2023.