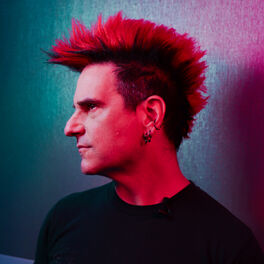 Dreams of Darkness, Visions of Light

The Darkness and The Light (Instrumentals)

The Darkness and The Light

Awakening With You (Remix Contest Compilation)

God in the Machine

After Dark (The Remixes)

Scandroid, the modern Synthwave project from Detroit based artist/producer Klayton, best known for his multi-genre project Celldweller, is Klayton’s love letter to the 80s. The debut, self-titled Scandroid album features 15 tracks, ranging from the driving instrumental energy of "Destination Unknown," to melodic vocal tracks like "Awakening With You," "Aphelion," and "Neo-Tokyo," rounded out with the cinematic epics "2517" & "Singularity." As a child of the 80s, Klayton has also included a cover of the classic Tears For Fears song "Shout," that he has been patiently waiting to cover since he first heard the song on U.S. radio in 1985. The 72 minute album depicts themes of a cyberpunk future where humans and sentient robots struggle to find a connection in their dystopian world.