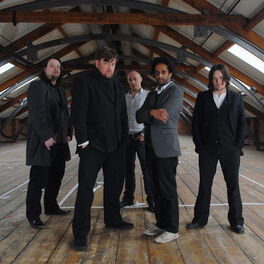 Live at The Ritz - An Acoustic Performance

Giants of All Sizes

The Best Of (Deluxe)

dead in the boot

Leaders Of The Free World

Asleep In The Back

Stay at Home with Kodaline

Friends from their college days, Elbow had an inauspicious start to their career that saw them dropped by record label Island before they had even released a single. Early EPs 'Newborn' and 'Any Day Now' started to rebuild their reputation and debut album 'Asleep in the Back' (2001) won a nomination for the 2001 Mercury Music Prize.

They continued to gather critical acclaim for albums 'Cast of Thousands' (2003) and 'Leaders of the Free World' (2005) but it was the Mercury Music Prize-winning 'Seldom Seen Kid' (2008) that made the significant breakthrough. Singles 'One Day Like This' and 'Grounds for Divorce' became popular indie anthems and high-profile festival appearances led to a sell-out gig at Wembley Arena. Greeted as returning heroes, the band played a set with the Halle Orchestra and Youth Choir at the Manchester International Festival.

In 2011, the album 'Build a Rocket Boys!' debuted at number two on the UK Albums Chart and featured the single 'Lippy Kids'. 2014 saw the release of 'The Take Off and Landing of Everything' which peaked at number one on the Irish and UK Albums charts and on the Billboard Heatseekers Chart. Seventh studio album 'Little Fictions' (2017) also hit number one in the UK, Irish, Dutch, New Zealand and Scottish Albums charts and features the single 'Magnificent (She Says)' which won the band their third Ivor Novello Award.

On their YouTube channel, Elbow released tracks 'Dexter & Sinister' and 'White Noise White Heat' in 2019. 'Giants of All Sizes', Elbow's eighth studio album, was released in the same year.