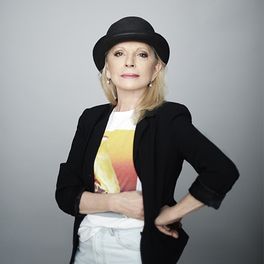 Véronique Sanson is a French singer, songwriter and multi-instrumentalist, and prime proponent of the Nouvelle Chanson Française movement in the 1970s that privileged the French language and musical traditions over the English and American influences that had pervaded her home country since the end of World War II. She began her career as a teenager alongside her sister Violaine, and François Bernheim in a trio called La Roche-Martin before being noticed by Michel Berger, who had written songs for French legends Johnny Hallyday and Françoise Hardy and pushed her toward a solo career. As well as performing (including a regular lunchtime slot in the restaurant of the Eiffel Tour) and recording, Sanson also wrote for other artists, including Petula Clarke. However, it was the 1972 release of her solo LP 'Amoureuse' that her profile began its stellar rise. The LP went Double Gold in its first five months of release. A year later, she had left Berger for the Buffalo Springfield and CSNY guitarist Stephen Stills and she moved to the United States with him. In 1976 she achieved her first Platinum album with the release of the Bernard Saint-Paul-produced 'Vancouver'. Her fame propelled her to fill bigger and bigger venues, and in 1976 she became the first French woman to sell out the Palais des Sports in Paris, playing for three consecutive weeks in 1981. By 1979 she had split from Stills, and returned to France where she continued to write and play live. The 1980s and 1990s continued her successes with awards and recordings that continued to gain critical and commercial success. Ill health meant that the early 2000s were less productive, however, she did manage to produce an acclaimed semi-autobiography, and a 'Best Of' LP. In 2008 her work was introduced to a new generation via Jay-Z's sampling of her 1972 song 'Une nuit sur son épaule'. She has continued to garner awards, including the Commander of the Ordre des Arts et des Lettres awarded by the French government in 2019.