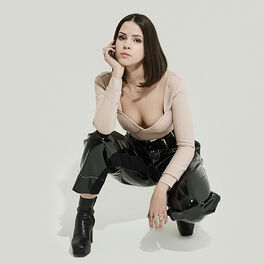 LP: Behind The Music

Marina Kaye is a 21-year-old French artist from Marseille, who shot to fame in her homeland four years ago when her debut single “Homeless” reached Number 1. Before that, Marina had never considered herself capable of being a pop singer. Describing herself as a “shy” and “weird” child growing up, Marina didn’t even know she could sing until one of her friends told her so. From there, Marina’s friend entered her into France’s Got Talent which she won in 2011 at the age of 13. In 2012 she signed to TGIT Music to work on her first album, Fearless. The album topped the charts in France and later became certified double platinum. Her hit, “Homeless”, gathered millions of views on YouTube. Fast forward a few years after releasing her second album, Explicit, and Marina has now more than 80 million collective views of her music videos on YouTube. SIA has also written one of her songs (“Freeze You Out”). She is now preparing her third record. In 2019 Marina is making “dark pop” with a maturer outlook on life. Her voice, which flits from mellifluous in one beat to pop-operatic in the next, is a beautiful boon to her songwriting. Stylistically, her music may jump between piano pop balladry and electronic/R&B sounds but Marina’s penchant for setting a mood and a scene remains central. Her songs, she says, are always “very personal” even if they’re cloaked in metaphor.