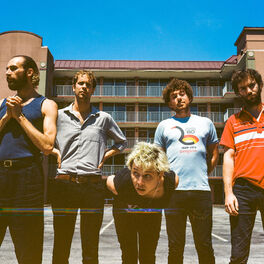 Sweep Me off My Feet

Sitting Up On Our Crane

From Perth in Western Australia and sharing band members with Tame Impala, Pond's blend of old school glam rock, psychedelia, rock and pop made them one of Australia's most successful bands of modern times. Good friends Nick Allbrook, Joe Ryan and Jay Watson formed the band in 2008 operating under the premise of a collaborative and fluid line-up with a free-thinking approach to music. It resulted in their 2009 debut album 'Psychedelic Mango', blending psychedelic ideas with rock and pop. It proved a productive mix with a flurry of ideas and original material which led to them recording their second album 'Corridors of Blissterday' in five days just a few months after the release of their first album.

Their third album 'Frond' wasn't far behind in 2010 as various other members dipped in and out of the band. They continued to share members with Tame Impala, who enjoyed their own success with their first album 'Innerspeaker' in 2010. Adopting a heavier, more traditional approach, Pond's fourth album 'Beard, Wives, Denim' won them wider acclaim as they toured the UK and USA, including celebrated shows at the South By South West festival. 2013 saw the release of 'Hobo Rocket', their fifth album in five years, and their reputation as an innovative hard-working band in love with the music they were creating was enhanced by the release of 'Man, It Feels Like Space Again' in 2015. They were back again in 2017 with 'The Weather', a concept album about the contradictions of a colonial city which again won them much critical acclaim.